Thank you to everyone who attended our first MentorMob University Webinar last Tuesday, August 21, 2012 on WizIQ!

We had a great conversation about the release of MentorMob University (MMU) and the powerful new tools it puts in the hands of educators, including workflow management customization, feedback analytics, and privacy controls.

The Learning Playlists below walk through Erin and my presentation from the webinar, which answered questions like:

We’re looking forward to continued chats both on “WizIQ Mondays” at 8pm CST, and on Twitter @MentorMob.

Each week we will be featuring a new topic suggested by our community of users. Feel free to share your ideas for our weekly webinar to Kristin@mentormob.com and Erin@mentormob.com, or find us on Twitter @ErinMMarguerite & @KristinMMarie. And if you would like to guest host, we would LOVE to have you!

The following playlist explains the basics: what is MentorMob and how do you use it?
http://www.mentormob.com/learn/i/how-to-use-mentormob

This playlist walks through how to use the advanced features of MentorMob University:

And this playlist goes over MentorMob University tips and tricks that savvy teachers are already using! 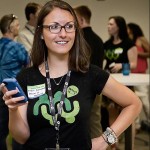 Kristin Demidovich is with Mentormob - She will be posting updates regarding their webinar series that\'s using WizIQ to connect educators with key influencers in the field.